Dam it but forget me not! 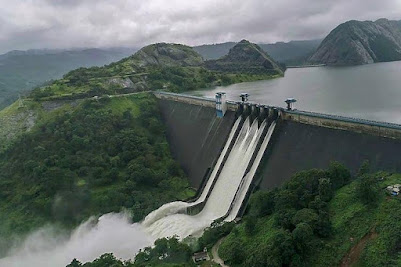 It is generally said that everything has a time and things happen only at its stipulated time. Quite a few weeks back my sister Chandrika sent me the writeup for continuing our blog. I knew I had to do it and I had plenty of time to sit down and work on it but it seemed somehow incomplete. It is only now that the time has come but I should not be saying that the time has come – for such a disaster to strike a population so literate, so aware and so much forward in thinking but the tragedy that has struck is unbelievable and it has happened a second time in the last few years. A cloud-burst has washed off a major part of mid-Kerala once again. The last time when the flooding happened due to rains it was at the fag end of a monsoon season and skies should have cleared for Onam festivities, the best time to be in Kerala. We were there, right at the point where it all happened and we escaped the floods by the skin of our teeth. This was the second week of August 2018 and we were crossing the downstream of Idukki dam on our way to Thekkady. My eagerness to once more stand on the holy ground of the Idukki dam which was Achan’s pride had been fulfilled but not entirely as by then they had sounded the red alert.

Why did so much tragedy happen and was the dam the reason has been discussed umpteen number of times though there has been total silence as to the reason the sluice gates were never opened for nearly 26 years. The Standard Operating Procedures and Operation and Maintenance manuals generally indicate that trials have to be conducted once or twice a year but then these are questions that experts must have looked into even if it is never brought out in the media. If only the advice of engineers and field related experts are heeded and they are allowed to do their job without interference much heartache could be avoided in our country I guess. This brings my thoughts back to how Achan laughingly responded to the Minister who asked him how come Mr Warrier you went on an official tour accompanied by your wife?” to which Achan said, “It is my misfortune that I had to settle for travelling with MY wife, Sir!” giving accent to the possessive adjective “Your” and “MY”. It was of course explained later that he had nearly emptied his savings, including Provident Fund, to the chagrin of his own sisters who were not hesitant in pointing out that he had three daughters of marriageable age.

India is lucky to have had such stalwarts as Mr. Kurien of Amul fame, engineers like Mr. Visweshariah, Mr. G.P.Warrier, our Uncle who retired as Chairman of the Railway Board, Dr. G.K.Warrier, his brother, the neurosurgeon , Mr.T.N. Seshan, the Election Commissioner and more recently Mr. E.Sreedharan, Mr. M.S. Swaminathan, to name just a few admirable men who fought tooth and nail with scant regard to their own stature and implemented what they believed was right. To tunnel through the heart of the capital and make Delhi what it is today is symbolic for the coming generations to take note. With our heartfelt condolences to the bereaved families, we dedicate our blog to all those who work hard to realize their dreams. 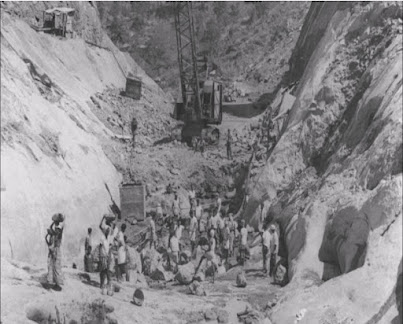 Many are the people whose efforts went into making of the marvel that is Idukki dam called the Idukki Hydro Electric Project or Idukki HEP in short. Starting from the innumerable labourers whose hard work cannot be ignored and the hordes of storekeepers, heavy vehicle drivers, mechanics and the clerks who maintained records, like ants went about their business to earn their daily bread. The documentary on the Sabarigiri project by the Films Division wonderfully portrays their efforts in days when earth moving machines did not exist. https://youtu.be/RltBvVqe49A Some of them may still be traced as they have settled in the neighbourhood of the dam but many like Achan have moved on. Even for Achan it was a wonder how ten years after his retirement he came back to Idukki to lay the penstock pipes as General Manager in the company Indian Hume Pipes established by Walchand Hirachand. Walchand is hailed as the pioneering architect of modern industrial India. Achan’s career after retirement also was noteworthy, from being General Manager of the condom manufacturing company Hindustan Latex to concrete pipes and penstock pipes gave me, the teenager, exposure to the manufacturing sector that rarely comes to anyone.

Talking of people involved in the construction of Idukki HEP, foremost among them is Mr. Camille Dagenais, the architect of most humongous hydroelectric projects and recipient of the National Order of Quebec. 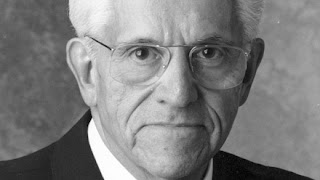 Achan must have been excited to know that the President and CEO of SNC group, Mr. Camille Dagenais, won the National Order of Quebec# award for parallelly overseeing two giant hydroelectric projects, one in Canada, Hydro Quebec’s Manic-5 or Daniel-Johnson dam (https://en.wikipedia.org/wiki/Daniel-Johnson_dam)  on the Manicouagan river, and guess what, another first international contract awarded in 1963 for designing and building the Idukki power station of Kerala, India of which the Idukki dam was a part. Of course he had also overseen other hydro power projects including the feasibility study for the Three Gorges dam in China.

#Translated version of the National Order of Quebec

M. Camille Dagenais was internationally known for his expertise in civil engineering, particularly in the engineering of large structures. Illustrious graduate of the École polytechnique de Montréal, he was one of the main architects of the SNC-Lavalin group.

Mr. Dagenais was born in Montreal in 1920. When he joined Surveyer, Nenniger and Chênevert in 1953, his colleagues quickly realized his qualities as a builder and organizer. He became a partner of the firm in 1959. With the world changing rapidly, Mr. Dagenais understood that things had to be done differently. Little by little, he had convinced the firm to reshape its practices, its organizational methods and its operating rules. In 1965, he was unanimously appointed to take the helm of “S.N.C.”. Two years later, the financial structure of the new entity was created, and shares were distributed to staff. In a few years, Mr. Dagenais had succeeded in building one of the first Quebec companies of international scope and contributed powerfully to making it a world benchmark.

In the 1960s, Mr. Dagenais led the team of engineers and hydrologists who were responsible for analyzing the Manicouagan-Outardes basin and designing the Manicouagan 5 hydroelectric complex (the Manic-5 power station proper and the Daniel -Johnson dam). This same team drew up the plans for Quebec's Première-Chute and Rapide-des-Îles power stations, as well as those for the Idukki power station in India. Mr. Dagenais was special advisor for other large hydraulic projects entrusted to his company: the development of the LG2A site in Quebec, the development of the Aoos and Acheloos rivers in Greece, the construction of the Sidi Saad flood control dam and El Haouach in Tunisia, the realization of the feasibility study for the huge Chinese dam of Three Gorges, among others.

During the second half of his career, Mr. Dagenais had put his sense of innovation at the service of local companies, notably the Royal Bank of Canada, Cogeco, the Canam group, the Jean Coutu Group, Industrial Alliance and Spar Aérospatiale. 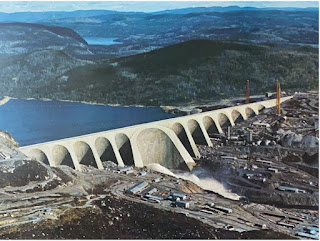 Barrage Daniel-Johnson- Manic – 5 on the Manicouagan River. The dam was named after Daniel Johnson Sr., the 20th Premier of Quebec, who was responsible for starting the project while serving as a minister in Duplessis's government.[a] Johnson died on 26 September 1968, on the day he was to preside over the scheduled inauguration of the dam.[4][6] The facility is owned and operated by Hydro-Québec.  - Courtesy- Wikipedia

May 08, 2021
Here Amma is photographed with the Beefeaters, having a Legacy of over 900 years –  the ceremonial guards of the Yeomen Warders of Her Majesty's Royal Palace and Fortress, the Tower of London Later in Trivandrum Amma appointed Unni, a deaf and dumb   young man   to help her in some odd jobs. The weird excuse for appointing him was that he had my brother’s pet name and my brother used to know him in the University college. The Dumb Unni, as he was addressed, used to maintain the tennis court in the University College grounds, dragging a heavy stone roller up and down - A heavy price for being deaf and dumb, yet always light on the feet and in mind, smiling all the time.  Chandrika’s anecdotes continue in her own words…..  In the final year of my under-graduation program studying English literature I had to read a bit of British history. While I was sitting in the verandah and reading Henry the VIII – a book with a splashy   cover of Henry the VIII, this guy came in front of me and
2 comments
Go back in time