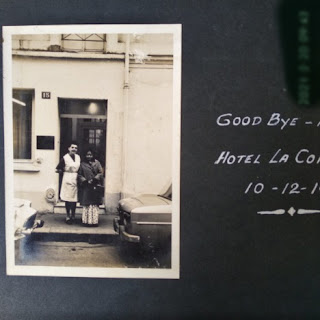 From Paris to London, yes, we made it across half the world!! – appears to say both Achan and Amma as they bid Adieu to Paris in front of Hotel La Comète on the 10th of December 1968. They seemed to be brushing away the dust of the Indian subcontinent, breaking the last link from the vast expanse of the Eurasian continent!

For Amma, the small-time village girl from Kerala, still draped in a traditional saree,

- holding a naughty dialogue with the equally naughty Egyptian camel, as though to her favourite cow and calf at home, in front of the Pyramids of Giza,

- awestruck at the feelings and questions bubbling up in her mind as she stood before Michael Angelo’s Pieta, the epitome of motherhood, or Da Vinci’s paintings of Gods and Men, be it Mona Lisa, Last Supper or many other,

- becoming aware of the sentiments of international brotherhood before the Palace of the Nations in Geneva,

- witnessing high academic discussions during their visits to the dams in the Alps mountains in France…..

…..all appear as rituals of the rites of passage, of her mind coming of age.

The trail Amma and Achan left behind so far, pausing in the Parisian city life, taking off from Hotel La Comète, the rise though not meteoric, seemed bright and ethereal for us.

The happy ambience of Christmas followed them to London, having already had a taste of the Christmas shops and decorations in Paris. London was, however, still recovering from the scars of the Second World War and the life in Britian had not yet reached the zenith of good living as the war had instilled a sense of frugality in people despite the vast advances in technology of the 50s and 60s. Today’s glitter and glamour are in complete contrast to the homespun versions of paper chains and stars of those days.

Quote Chandrika: Kala, wonder if you remember in the late 50’s or early 60s, when I was 13, just a schoolgirl  at Kottayam, we used to make Christmas stars using newspaper and the midrib or petiole of coconut palm leaves?

Me: How can I remember? I was a newborn in Kottayam - after which we shifted to Thiruvanthapuram soon after didn’t we?? I do remember, however, making paper garlands and small bouquet of flower and two leaves for our cousin Sreelatha’s wedding at Haripad! The decorations were  simple but elegant against the sheer white fabric that covered the traditional pavilion made of dry coconut leaves. 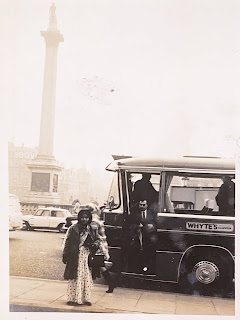 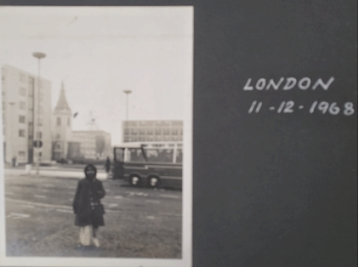 On the 11th December, 1968 we can deduce from the photograph taken by Achan and meticulously documented that they were roaming in London. It is said of the paraphernalia of a bride following the British tradition there should be “something old” that stands for continuity; “something new” showing optimism for the future; “something borrowed” symbolizing borrowed happiness; “something blue” representing purity, love and fidelity. Going by this and the perspective that my parent’s trip around the world can be considered as a second honeymoon it comes as no surprise that Amma’s rich purple and gold bordered canary yellow Kancheepuram silk saree was borrowed from her younger sister. Walking in London in the beautiful saree, her long hair left open after a shower attracting the surprised and appreciative looks she got from passersby seemed to have struck Achan as unusual. It is quite unfortunate that we do not have a shot of Amma without a coat showing off her saree though come to think of it I wonder where they would have been walking in winter without a coat though…it could be that the Saree was visible below her coat!

May 08, 2021
Here Amma is photographed with the Beefeaters, having a Legacy of over 900 years –  the ceremonial guards of the Yeomen Warders of Her Majesty's Royal Palace and Fortress, the Tower of London Later in Trivandrum Amma appointed Unni, a deaf and dumb   young man   to help her in some odd jobs. The weird excuse for appointing him was that he had my brother’s pet name and my brother used to know him in the University college. The Dumb Unni, as he was addressed, used to maintain the tennis court in the University College grounds, dragging a heavy stone roller up and down - A heavy price for being deaf and dumb, yet always light on the feet and in mind, smiling all the time.  Chandrika’s anecdotes continue in her own words…..  In the final year of my under-graduation program studying English literature I had to read a bit of British history. While I was sitting in the verandah and reading Henry the VIII – a book with a splashy   cover of Henry the VIII, this guy came in front of me and
2 comments
Go back in time